TRUMBO
Caught in the Web 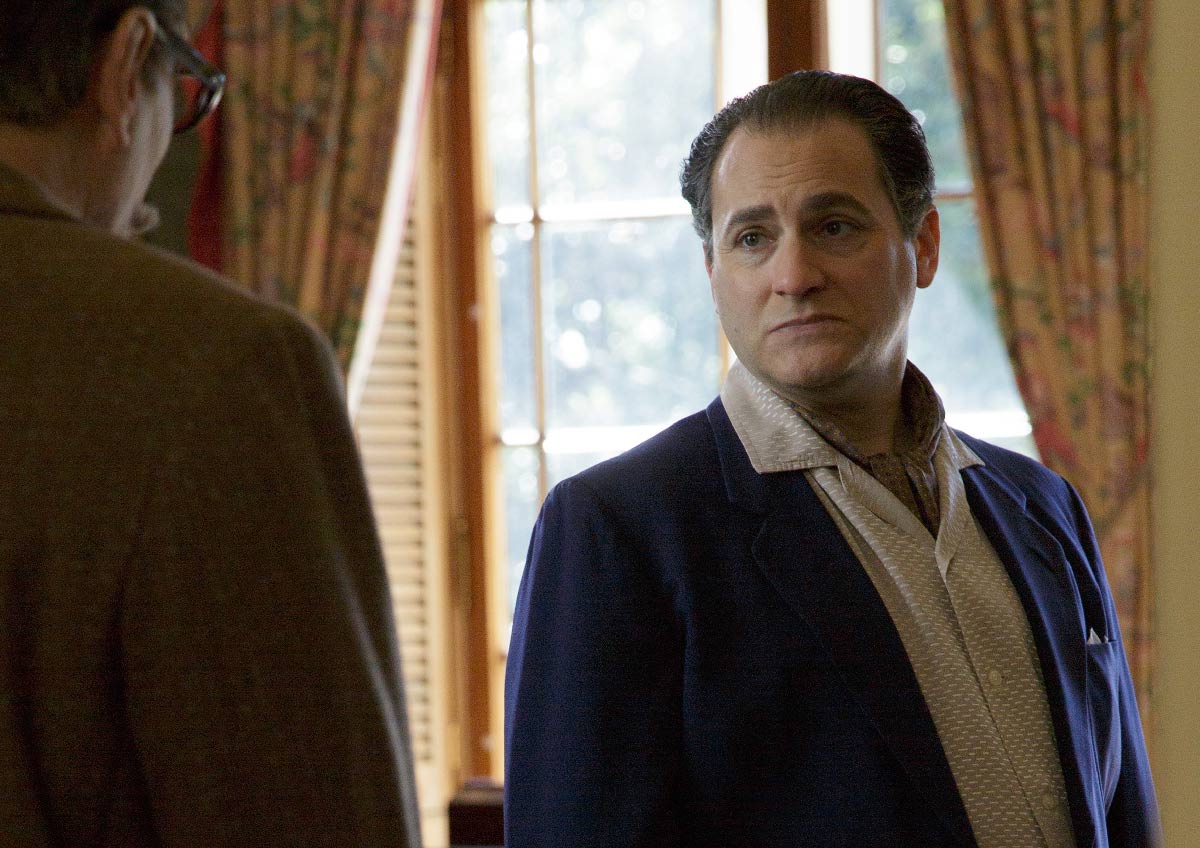 In Jay Roach’s historical drama TRUMBO, Michael Stuhlbarg plays Edward G. Robinson, the acclaimed Hollywood actor whose life and career became inextricably bound with Dalton Trumbo’s own fate. In casting the film, Stuhlbarg was one of the first actors called. Stuhlbarg, who excels in finding depth and complexity in well-known historical figures, was the perfect person to play the iconic Hollywood actor. Robinson’s onscreen persona, playing gangsters and tough guys in such films as Little Caesar and Kid Galahad, often masked the sensitive, cultured man he was in real life. Not only astutely attentive to political and social issues, Robinson had amassed one of the finest private art collections in Hollywood. To find his character, Stuhlbarg dug deep. “He studied Edward G. Robinson's films and all the material he could find,” recalls Rawat. “He was careful to play the man, not the famous characters he portrayed in his films. He really became Edward G. Robinson. He felt the pain and anguish of the man and as an audience member, you feel for him.” In the process, Stuhlbarg uncovered a person of conscience caught up in the furor of his time. “His name was constantly turning up on lists of suspected communists, even though he never attended any meetings or joined the party,” recalls Stuhlbarg. “He felt a great need to clear his reputation.” Through Stuhlbarg’s performance, Robinson becomes a figure who epitomizes the difficult choices people of conscience had to make during the Hollywood blacklist, as well as the high cost Trumbo paid for staying true to his beliefs. “There are no good guys or bad guys in this story,” remarks Stuhlbarg. “People do what they can to survive. It’s a wickedly fast and dangerous life we live and we can learn a lot from Trumbo’s bravery.”

The Pillowman
Funny and Heartbreaking 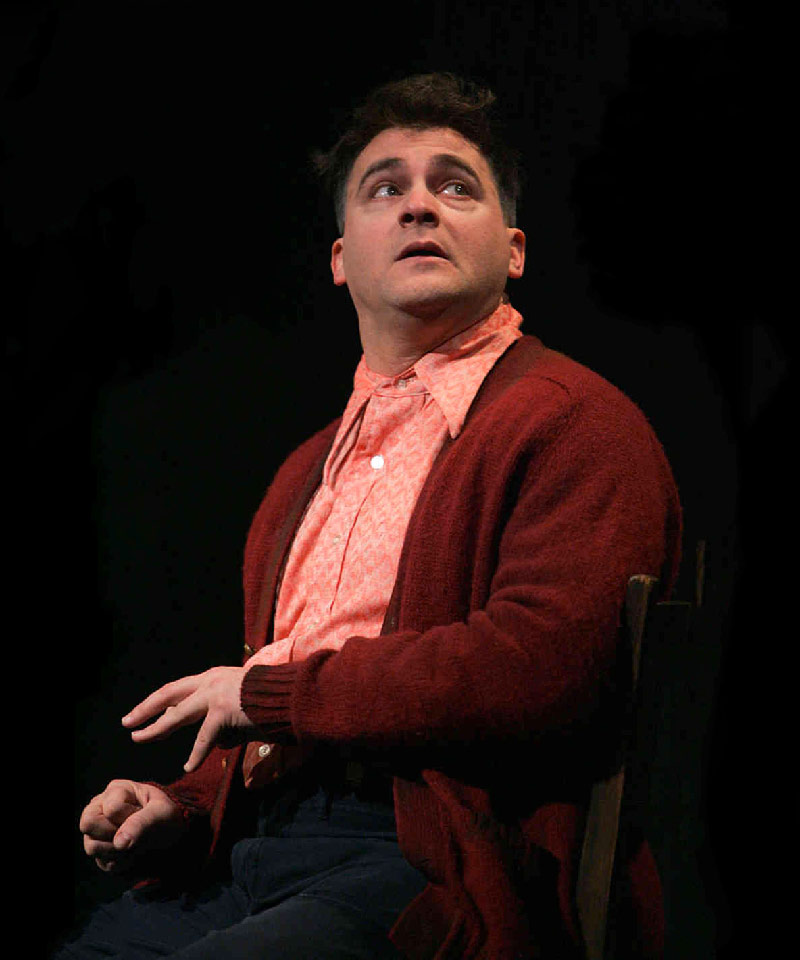 For many, it was Michael Stuhlbarg’s performance in the 2005 Broadway production of Martin McDonagh’s The Pillowmanthat first showed the actor’s agility in capturing different aspects of a character. Stuhlbarg played Michal, the brother of Katurian (Billy Crudup), a writer who has been arrested by the police because of the shocking similarities between his stories and a series of brutal child murders. At first, the police tell the detained author that his brother Michal has confessed to the murders, claiming that Katurian’s gruesome tales had incited him to violence. As the drama unfolds, however, Michal’s story breaks down. It turns out he hadn’t confessed, but rather was working with the police. Michal proves to be not only an unreliable narrator, but also an undecipherable character. In Stuhlbarg’s skilled hand’s, Michal shifts back and forth between simpleton and sadist, between victim and victimizer. Having graduated from Julliard in 1992, and gone on to study theater in Los Angeles, Lithuania, and London, Stuhlbarg used his years of training to full effect to bring Michal’s many personalities to life. “I grew to feel affection for him and pity for him, and became excited about the prospect of working on the challenges that the role of Michal presents,” Stuhlbarg told Scene4. Moreover, Stuhlbarg created a character perfectly in tone with the play’s own emotional balancing act, a figure caught somewhere between comedy and tragedy, between childlike innocence and incomprehensible cruelty. For critics, it was a virtuoso high-wire act. The New York Times’ Ben Brantley wrote, “Mr. Stuhlbarg boldly and expertly captures both the innocence and ugliness of Michal.” Indeed, for Gothamist, Stuhlbarg transcended the plays fabulist scenario, “making Michal totally real––a man-child who’s both creepy and gentle, funny and heartbreaking.” For his performance, Stuhlbarg won a Drama Desk Award for Outstanding Featured Actor in a Play and received his first Tony Award nomination.

A Serious Man
The Comic Philosopher 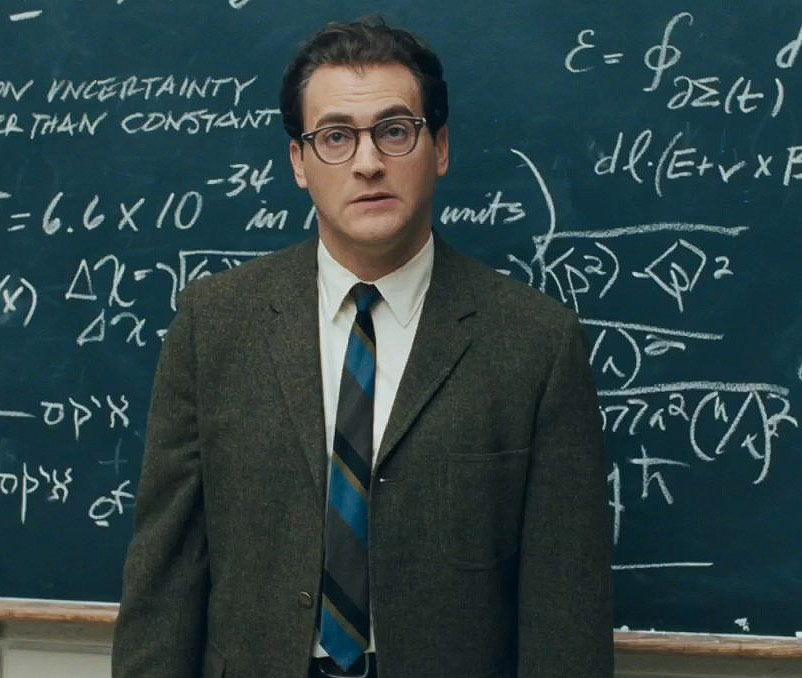 In A Serious Man, the Coen brothers’ 2009 semi-autobiographic comedy about a Midwestern Jewish community in the Sixties, Michael Stuhlbarg was cast to play the lead character. Larry Gopnik, a professor of physics at a local college, suddenly discovers that his otherwise ordered life is unraveling. His wife wants to leave him. A student is trying to blackmail him. His crazy genius of a brother needs professional help. His son, who should be studying for his bar mitzvah, is getting stoned. And, on top of everything, the Columbia Record Club is billing him for a membership he never ordered. Even Gopnik’s work on philosophical theories, like Heisenberg’s Uncertainty Principle, doesn’t help him with his sudden bout of despair and dread. To capture the full tragedy of this comically existential man, the Coen brothers needed a serious actor who would also be a surprise. “We wanted a lead actor who would be essentially unknown to the audience,” Joel Coen explained in the production notes, but added that “Michael Stuhlbarg isn’t unknown if you’re a theatergoer in New York.” As a sort of blank slate, both to audiences and in the film, Stuhlbarg was able to use his passivity to draw viewers into the black hole that is Gopnik’s character. In the Washington Post, Ann Hornaday explains, “Stuhlbarg, a virtual unknown on the big screen (as are most members of the superb supporting cast), portrays Larry in a fearlessly nebbishy performance, earning every shred of the audience's empathy as a man of constant sorrow, whose inexplicable trials plunge him only deeper into sincere, if increasingly desperate, spiritual inquiry.” Other critics were quick to recognize the remarkable skill Stuhlbarg demonstrated in ensuring the tone of his character resonated with the comic and philosophical frequency of the film. “Much of the success of A Serious Man comes from the way Michael Stuhlbarg plays the role,” explains Roger Ebert. “He doesn't play Gopnik as a sad-sack or a loser, a whiner or a depressive, but as a hopeful man who can't believe what's happening to him.” For his serious efforts, Stuhlbarg received a Golden Globes Nomination for Best Performance by an Actor in a Motion Picture. 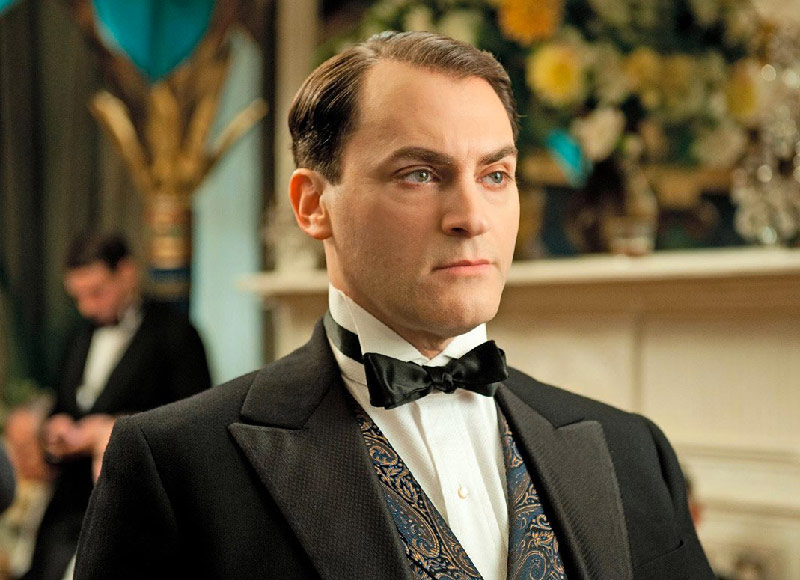 When Terence Winter cast Michael Stuhlbarg in 2010 to play the notorious real-life Jewish gangster Arnold Rothstein in the HBO series Boardwalk Empire, A Serious Man had not yet been released. But in hindsight, the role of Rothstein seems to extend perfectly the exploration of Jewish identity that Stuhlbarg began with the Coen brothers. “Mr. Rothstein has very different DNA than Larry Gopnick does,” notes Stuhlbarg. “He sees the world in a completely different way. Rothstein seizes every opportunity to take advantage, whereas Larry finds himself swimming in his surroundings trying to figure out why his world is changing so drastically and so quickly.” Of course, all Winter saw when he first reached out to Stuhlbarg was the actor’s talent. “Michael is a terrific actor who brings a rare combination of intelligence, ruthlessness and humor to this role,” Winter told the Jewish Journal. “He has a natural intensity that compels an audience to watch him closely.” To be sure audiences had something fascinating to watch, Stuhlbarg embarked on extensive research into the nature of this civilized gangster, only to discover that many of the accounts were seemingly contradictory. Although the facts of Rothstein’s life were well documented––he dressed as a business professional and didn’t smoke or drink alcohol––accounts differed as to his demeanor and personality. “Some people thought of him as a young man having a laughing, smiling, open non-poker face. Others described him as having a very cold and gray presence,” explained Stuhlbarg. The actor dug deeper to find an emotional core that connected both to the history of the character and the show’s themes. To play Rothstein, Stuhlbarg located what made this calm and dapper Jewish businessman the mentor to so many violent, blood-soaked gangsters, like Lucky Luciano and Dutch Schultz. Within a few episodes, Stuhlbarg’s Rothstein became a key component to the show’s socially complex vision of life during Prohibition. “As Rothstein, Stuhlbarg gets to deliver one hypnotic monologue after another that makes clear why all these Irish and Italian tough guys are so fearful of this Jewish money man,” applauds Hitfix critic Alan Sepinwall.

PAWN SACRIFICE
The Man Behind The Enigma 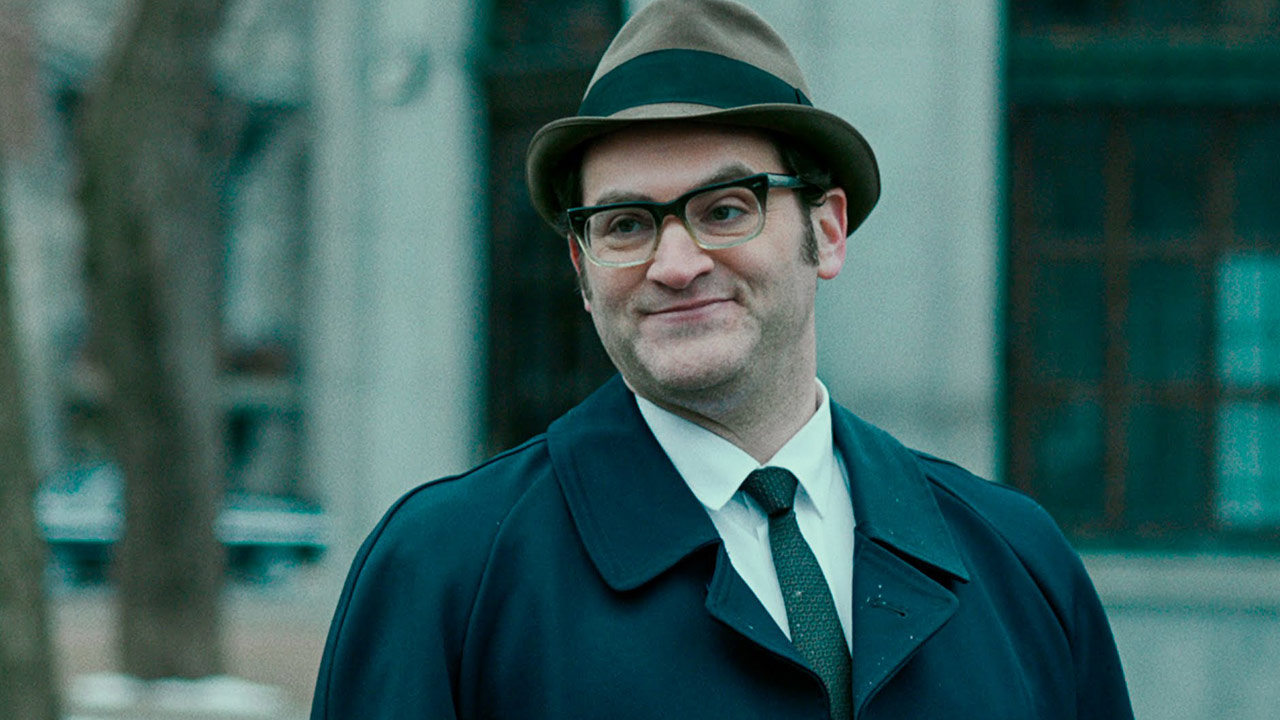 In Edward Zwick’s PAWN SACRIFICE, Michael Stuhlbarg plays Paul Marshall, the attorney/promoter who helped guide Bobby Fischer (Tobey Maguire) to become the World Chess Champion in the 1972 “Match of the Century.” To portray the real-life Marshall, Stuhlbarg transcended the historical facts to find the emotional heart of his character. Marshall may have had an ideological motivation, pushing Fischer to beat the USSR’s Boris Spassky (Liev Schreiber) in order to win another battle in the Cold War. But played by Stuhlbarg, Marshall stands out as something much more than just a political prop. Peter Sarsgaard (who plays Fischer’s confidant, Father Bill Lombardy) points out that Marshall’s motives in the film are an open question. “It makes him one of the most interesting characters in the piece. My agenda is to serve genius,” Sarsgaard points out. “Why is this other guy here? Michael Stuhlbarg has this kindness. But what does this guy really want?” To understand his character’s motives, Stuhlbarg sought to find out more about the real man. “I learned he was a multifaceted guy who lived a really fascinating life,” he says. “He was an accomplished attorney and a force in the music industry. I was able to get in touch with his widow, Bette Marshall, and she was a continual source of anecdotes and photographs, which was a huge gift for me.” In the end Stuhlbarg concludes, “Marshall seems like a man who cared about doing the right thing.” From his research, Stuhlbarg crafted a character true to both the film and the real man. For producer Gail Katz, Stuhlbarg “reinvents himself for every part and he’s really very special in this movie.” Here Stuhlbarg’s Marshall is many things: a possible political puppet master, a lover of chess, and a man who deeply cares about Bobby Fischer. For Stuhlbarg, “Eventually, what I think kept Marshall on the journey was his insight into the fact that Bobby was a child—a neglected child. From what I could gather, he became a kind of father figure for Bobby.”