DANNY COLLINS tells the story of an aging rock star with a heart of gold and some less-than-shining moments in his personal life. To depict a career trajectory that spans five decades, writer/ director Dan Fogelman and Production Designer Dan Bishop needed to show both Danny’s stellar rise and fall from grace while alluding to his choices and influences as an artist. No easy task. Enter Graphic Designer, Evan Regester and Art Department Coordinator, Head Researcher and Resident Musicologist, Kama Hayes.

From the very start, Bishop had a clear vision of Danny as a folk rock singer/ songwriter who transitioned to standards later in life. Looking to beloved icons such as Rod Stewart, Elton John and Neil Diamond, he tasked the creative team with creating a compelling visual history that would track Collins’ career through the decades, pulling in influences from each era to show the evolution of his music. While the story is expressed in the memorabilia found around Danny’s mansion and photos from his past, the clearest example is found in a gallery of ten album covers proudly displayed on his wall. But how to craft an iconic rock star from an iconic actor?

Thankfully leading man Al Pacino has enjoyed a career as enduring as Danny’s. Both character and actor made his major debut in early seventies, receiving critical acclaim before being thrust into the public eye. Of course, Pacino’s time in the spotlight has been chronicled by photographers through the years, turning the search for appropriate snapshots into a veritable treasure hunt for Kama Hayes and team.

Says Hayes of the process: “We used [stock image sites] Corbis and Getty to find images of Pacino through the years. I tried to find photos where he looked like a musician or particularly handsome, or just looked representative of an era.” The team came up with a timeline to determine when Danny had gold singles, what types of songs and genres he may have experimented with to stay relevant through the years, then developed album titles that would serve the story.

When it came time to design the album covers, the team pulled cultural references that gave a nod to trends as they happened chronologically. The seventies start with a rich, earthy color palette of brown and orange, complemented by bold typography that uses heavy swashes. The album cover for Collins’ biggest hit, Hey Baby Doll, uses a three dimensional, gilded treatment for his name that clearly foretells his rise to superstar status when paired with a minimal, leather clad “bad boy” photo. 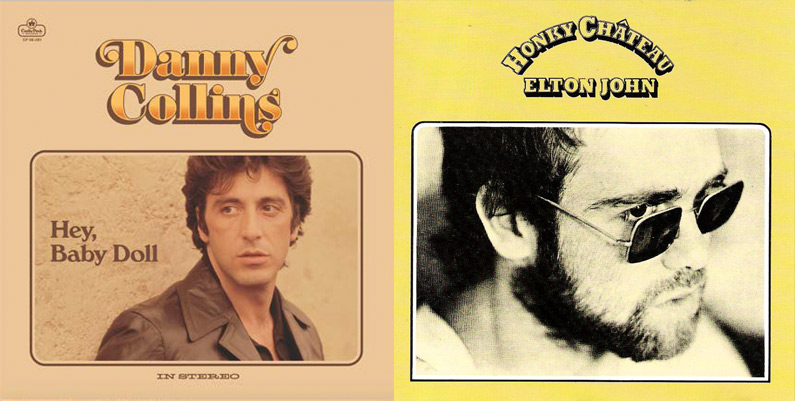 The covers of the later seventies seem to touch on the country and western trend of the era, leading to a more minimalist approach that takes a sharp turn in the eighties.

Promises marries the neon colors and Art deco type used heavily in the eighties. But it’s in Danny’s last two albums that things get interesting. His name takes on its own distinct branding, echoing the fact that he is firmly planted into the homes and hearts of his audience. 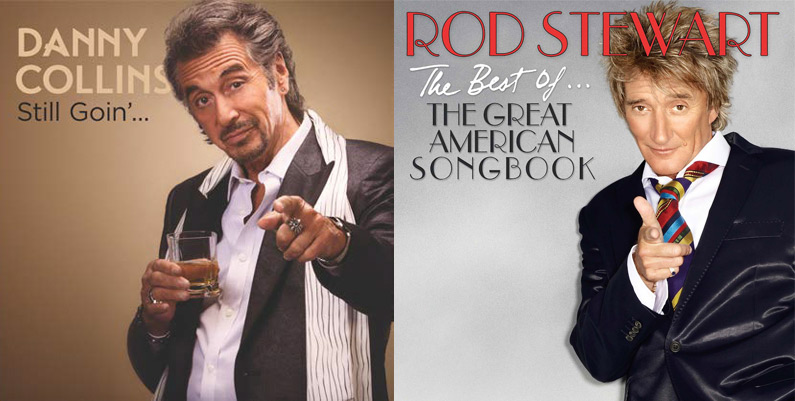 The development in the design of his albums alludes to Collins’ own evolution. His first eponymous album is faceless, really driving home his desire to be a noteworthy artist. As his career develops over time, several different characters come to light, ranging from the pensive folk troubadour on Playing Pretend to the country warbler on On the Rocks and even a soulful crooner on Rock ‘N’ Soul. It’s as if every album is an attempt for Danny to find himself as artist and as a man. Here is a character searching for something more, both in his life and his music. 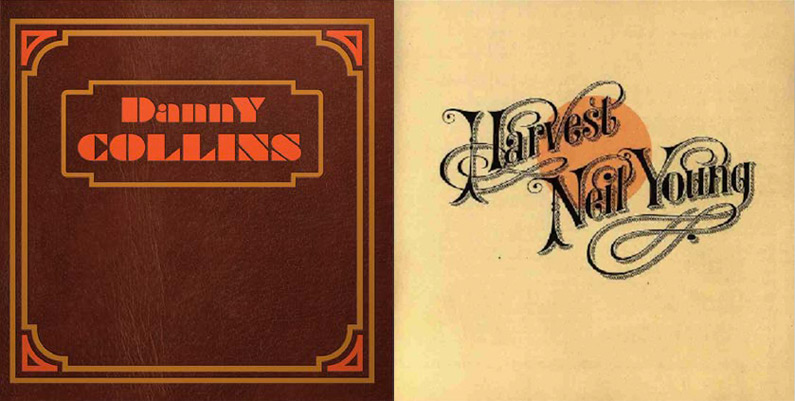 In the film, Danny seems to believe that he only had “one good album” before he stopped being “the real thing” and started singing their songs. But his album covers show much more heart. Perhaps, like the man behind the music, there’s more to these albums than he thinks. Sure, Danny has shown made some blunders in the past, but underneath it all lies integrity and tenderness. There’s a depth to these images that belies the Vegas-y swagger and scarf-tossing charade that charms Danny’s blue-haired fans, making both the character and his story that much more heart-warming.